“Our Lord has written the promise of resurrection, not in books alone, but in every leaf in springtime.” Martin Luther

Wartling Churchyard. Its history and present place in nature conservation

The Church of St. Mary Magdalene Wartling possesses a historic Churchyard. Far more than a cemetery it cares for those that are held in its embrace over the many past generations in a unique way, and this care may well date back to Saxon times.   The management of the surrounding fields has changed from using Oxen to  horse to Traction Engines to tractors, and with, in some cases, the use of very questionable chemicals. The churchyard however remains a seasonal reminder of the plant and wildlife of the past centuries.

It is a place where many people visit in order to find peace and solace, where some make a regular or annual visit to lay flowers, and others journey from across the world to visit the last resting place of an ancestor before the family emigrated to the New World.   No longer do sheep graze there to mow, but the plants and wild life still flourish under the love and care that is given. Recent events and surveys carried out in Wartling Churchyard showed that there were over 70 species of moths (please see the News Page for that event details) 37 varieties of Moss and Liverworts etc, 90 varieties of vascular plants, ranging from Sycamore Trees to Ox-eye Daisy and 108 varieties of Lichen, as well as bird an animal life that is increasingly being excluded from previous habitats. In the Church you will find a book with the details of the surveys.

Wartling Churchyard is not like a park, garden or cemetery with distinct edges, straight lines or geometrical curves, but resemble a cottage garden, beloved of very many and usually of the sort voted the public winner in the Chelsea Flower Show. Perhaps it then appeals to our genetic makeup, allowing any of us to visit whenever the need is there for us to do so, and relax in quiet contemplation with the creation of nature. A place where perhaps we realise that, despite the stress and strain of daily life, we are a part of something much bigger.

You can read about our local area HERE

And you can read about our local farmland HERE

Pilgrimage was once Britain’s most popular expression of leisure and spirituality,  enjoyed by Kings and labourers alike. But the tradition was cut short in 1538, when Henry VIII and Cromwell banned pilgrimage in Britain. Ever since then, the tradition has lain fallow until now, being revived by the British Pilgrimage Trust.

It was wonderful to learn that the Church of St. Mary Magdalene Wartling was on one of the old Pilgrimage Routes, the 'Old Way', a 250 mile journey from Southampton to Canterbury.

We still have people visiting us that are walking the pilgrimage route. They are a living part of this tradition of Christian Spirituality and commitment, joining their footsteps, as they enter St Mary's, with the countless others that have trod the path into and in the Church over the many centuries. Among them being King Henry ll who as a penance for the death of Thomas Becket, walked this route, and did penance at the tomb after walking the last few miles of this very route into Canterbury barefoot, while reputedly being flogged by the Cathedral monks.

The core goal of the British Pilgrimage Trust is to “advance British pilgrimage as a form of cultural heritage that promotes holistic wellbeing, for the public benefit.”

Pilgrimage, which is journeying with purpose on foot to holy places has been manifest since hunter-gatherers followed well-worn tracks, which became processional pagan pathways, which in turn became ritualised journeys in Celtic, medieval and early modern Christianity. Pilgrimage was once Britain’s most popular expression of leisure and spirituality.

To learn more about the Pilgrimage Trust and to view the map, please click on the image that is below:

Farming can be a lonely and hard occupation.          That is why we are proud to support the work of the R.A.B.I, you can read about their work HERE and  also the Farming Community Network, you can learn of this HERE.

Farmers have been especially hard hit with depression due to recent events. Please see the Farm Safety Foundation video: HERE.

The Churchwardens PPC secretary and the members of the PCC are pleased to announce St. Mary Magdalene Wartling has gained an A Rocha Environmental Award for the environmental care carried out on the Church and surrounding area over the many years. 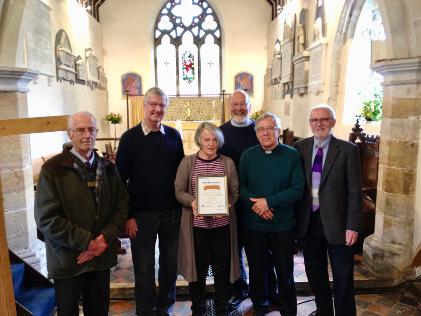 Our Bronze A Rocha Award was presented to us on Sunday 28th of April By A Rocha's Paul Williams who attend our 10:00 Service with his wife Heather. L to R above: Church Wardens Paul Hurle and David Harding, Church Secretary Penny Vasey, Rev Richard Stevens and Rev Peter Doodes, with Paul Williams.

Greening the Church is a Facebook Group created to host Chelmsford Cathedral's Virtual Conference of the same name. Following on, it is now a forum to share ideas, learning and have discussions about how to make our churches greener throughout the Church of England. for details of this, please click HERE.

Below are a few images of the wildlife care and some facilities at St Mary Magdalen Wartling. Please click on them to see them and their stories full-screen. 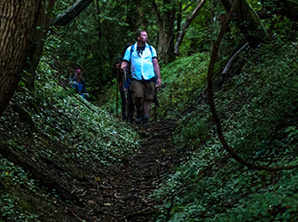 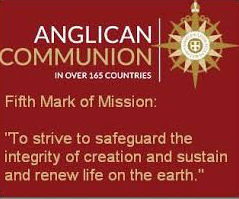 For details of 'Caring for God's Acre,' the associated Bumblebee Conservation Trust, Eco-Church and Fairtrade please click on the below images. 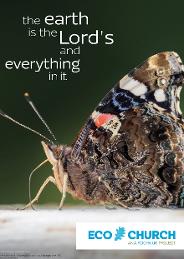